From Testar
Jump to navigation Jump to search

On this wiki we will describe how to install and use Testar. If you want/need an account to contribute please send an e-mail to wiki@testar.org (Consult the User's Guide for information on using the wiki software.)

GUI Testing is a testing technique where one tests the System Under Test (SUT) solely through its Graphical User Interface (GUI). The only way to find errors is to thoroughly observe the status of the GUI throughout the test. This type of testing is usually still carried out manually, where a tester just follows a previously written test case and verifies whether the application responds to all inputs as expected.

On the one hand GUI testing is a relatively straightforward process, since one does not need to read or test the source code of the SUT. On the other hand it is quite laborious, time consuming and, well... boring...

Approaches for automation of GUI testing are for example Capture & Replay or Visual Testing. These approaches use test scripts to automate the steps of each test case. These type of tests, whether manual or automated through scripts, test the sunny day use cases and mostly follow the happy paths. But what about the less sunny test scenarios? Those scenarios executed by the rogue user?

TESTAR is an open source tool for automated testing through GUI<ref>paper</ref>. It automatically interacts with the SUT by clicking and typing on the controls of the GUI. It is able to recognize abnormal SUT behaviour, such as crashing or freezing. Moreover, you can add application specific test oracles that are able to detect domain specific faults. TESTAR reports test sequences that lead to failure.

We have a Virtual environment at the UPV in Valencia.

How to get started (handson manual)

There exists a hands-on manual that will permit you to get started with automation of GUI testing using TESTAR. You can always get the latest version of this manual here:

In the manual it is explained how to get started with the latest version and a virtual machine.

The software architecture establishes guidelines on the structure, operation and interaction between the parts of the software. In this case, the needed instructions are executed from the controlling machine. It coordinates the operations of each worker machine and sends them the requests that they must attend.

The file server is known as Qsamba server. It represents the center of operations of this architecture, located in the N directory of the controlling machine. It contains:

All workers execute the runner.sh script, located in the scheduler folder. This script makes them sleep for a minute and then check their queue folder to see if they have any .bat file to execute (Image "Runner.sh").

The central structure of the folders can be seen in the image below right. 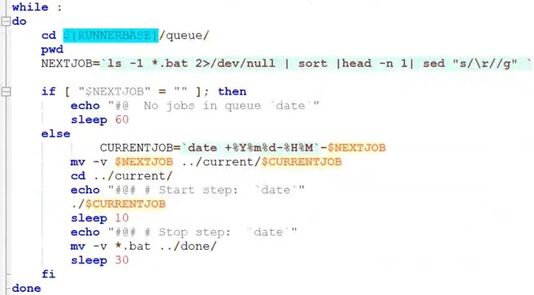 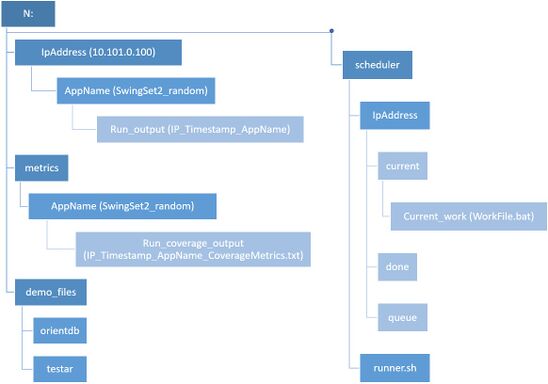 Structure of the N directory

Preparation of a centralized TESTAR distribution

A single, stable TESTAR distribution must be used for all workers. This avoids unexpected behavior differences that might appear when using different versions.

Preparation of a centralized OrientDB distribution

As was done with TESTAR, a centralized OrientDB distribution must be prepared for all workers.

As stated before, the central Qsamba server contains a folder "N:\scheduler" that is used by workers to check their pending tasks. Each worker checks the IP address + queue folder to get the "task.bat" to be executed (for example, "N:\scheduler\10.101.0.101\queue").

For Each SUT + Protocol we will need a customized batch file to launch TESTAR with the desired settings. Between every execution, to have the same initial state, each worker will:

How to launch multiple batch and workers

This is an example of the general steps to follow:

After that, for a specific SUT (Spaghetti) and protocol (Random), this must be run:

As there are multiple batch files to execute, we use alphabetical order by placing a letter at the beginning of the name of the new files. 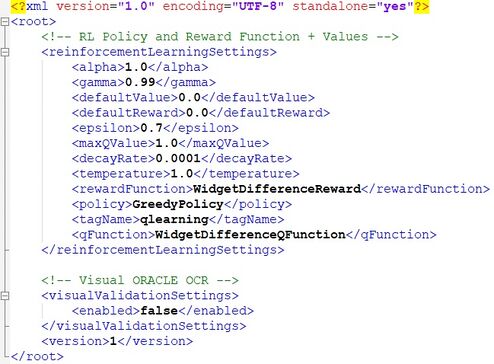 TEST_SpaghettiRandom.bat, mentioned above, is an example of a specific batch file for the Spaghetti SUT and the Random ASM. In the image on the left you can be seen the content of two files corresponding to the Spaghetti SUT, one of them with the Random ASM, and the other with the Reinforcement Learning ASM. The main parameters that these type of files contain are:

As we can see in the second example, there is a parameter called ExtendedSettingsFile, An XML file that contains additional settings is referenced by it, and looks like the next image. In this case, its content consists mainly of attributes related to the Reinforcement Learning technique.

Each "N:\scheduler\10.10X.0.1XX" worker contains a runner.log that prints the tasks results. They also read TESTAR err output buffer, so we can check these logs to see if TESTAR throws an exception. This command prints the last 5 lines of all logs:

The compressed TESTAR output for each worker + SUT + protocol are stored in “N:\10.10X.0.1XX\SUT_Protocol”, and the TESTAR metrics (jacoco + time) are saved in “N:\metrics\SUT_Protocol”.

If you get this error this means that your JAVA_HOME path does not point correctly to the installation path for the Java Development Kit.. To set your JAVA_HOME look for example here:

Which platforms are supported?

The TESTAR binaries that are downloaded currently supports Windows. We have older versions that work with MacOS, Linux and Android.

What is required from the System Under Test (SUT)?

Not much, just that the application respects the accesibility API of the underlying Operating System. For web applications you can use the WebDriver.

How to set TESTAR with different SUT?

TESTAR main version offers three options to connect with the SUT. Depending on the application that acts as SUT and the way we want to interact with it, we must choose one or the other.

TESTAR WebDriver version also includes an additional option to connect to the desired SUT using the Selenium webdrivers.
How to set TESTAR with different SUT

If TESTAR doesn't correctly take the coordinates of your environment to execute mouse actions or take screenshots, please go to https://github.com/TESTARtool/TESTAR_dev/issues/222

The feedback about the Windows screen setting of your environment will be welcome to improve TESTAR tool.

TESTAR is distributed FREE of charge as an open source project under the BSD3 license, some components are licence under the Eclipse Public License 2.0.

From other people using TESTAR