TESTAR is a tool that enables the scriptless automated system testing of desktop, web and mobile applications at the GUI level. The goal of the TESTAR team is to build a tool that shifts the paradigm of GUI testing: from developing scripts to developing intelligent AI-enabled agents.

TESTAR is available under the BSD3 license and is published on GitHub https://github.com/TESTARtool/TESTAR_dev .

WHERE DOES IT COME FROM?

TESTAR has been developed within the context of the FITTEST (Future Internet Testing) project (EU project no: 257574 FP7 Call 8 ICT-Objective 1.2 Service Architectures and Infrastructures) that run from 2010 till 2013. After that development has been continued by the Universidad Politecnica de Valencia, Utrecht University and the Open University The Netherlands in the context of several national and European funding initiatives. The tool was piloted in various companies in ERASMUS+ projects like SHIP and various nationally funded projects from the Spanish and Valencian governments. In 2017, the development was continued in the context of the TESTOMAT ITEA3 project.

HOW DOES IT WORK?

The underlying principles of TESTAR are very simple: generate test sequences of (state,action)-pairs by starting up the System Under Test (SUT) in its initial state and continuously selecting an action to bring the SUT into another state. TESTAR basically generates test sequences repeating the following 3 steps shown in the diagram. 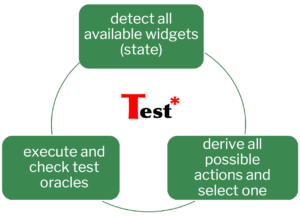 After we start the System Under Test (SUT), we scan (or scrape) the GUI in order to obtain the state of all control elements (widgets) on the screen (type, position, enabled/disabled, etc.)

Subsequently, TESTAR derives a set of sensible actions (such as clicks, keystrokes, drag and drop operations, etc.) that can potentially be executed in that state and selects one.

The selected action is executed and brings the SUT in a new state. The oracles are applied to this new states, to determine if there are any failures of the SUT.

WHERE TO READ MORE ABOUT IT?

The latest overview of TESTAR has been published in STVR 2021. It contains a description of TESTAR together with a list of the industrial case studies it has been applied to and a research agenda. If you want to cite TESTAR please cite this paper: 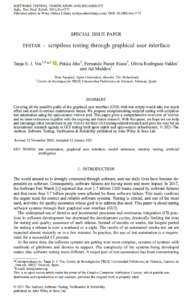 Do you want to do a Bachelor or Master degree project about TESTAR and participate in an international open source project? We have many possible ideas for you. Convince your supervisor and contact us at info@testar.org.

The deadlines for submitting your abstract and final paper Industrial track, Research paper and Testing Tools Paper for the #ICST2022 have been extended with 1 week.

The latest description of TESTAR together with a research agenda can be read in STVR special issue: https://onlinelibrary.wiley.com/doi/epdf/10.1002/stvr.1771

Look at TESTAR testing a Mortgage Calculator of the @ingnl bank!

If you are using the TESTAR tool (http://www.testar.org) to test or in your courses or trainings, please let us know! We are always happy to help you with anything we can.